Bill Clinton, full name William Jefferson Clinton, was born on 19th August 1946 in Hope, Arkansas. He is an American politician who from 1993 to 2001 served as the 42nd President of the United States. Preceding the presidency, from 1979 to 1981 and from 1983 to 1992, Clinton was the Governor of Arkansas. Clinton, a member of the Democratic Party, was ideologically a New Democrat and many of his policies reflected a centrist “Third Way” political philosophy. He was brought up in Arkansas and attended Georgetown University, the University of Oxford, and Yale Law School. 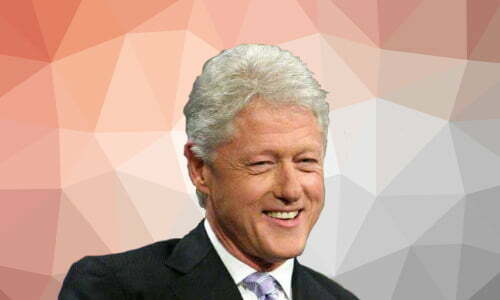 Bill Clinton met Hillary Rodham at Yale and in 1975 they got married. Clinton has remained on the global stage by working with the Clinton Foundation and campaigning for his wife, Hillary Clinton, who ran for U.S. president in the 2008 and 2016 elections.

Bill is a loyal Southern Baptist, even after official condemnation by his church. He sticks to his Southern roots and even attends–and sometimes gives sermons at–a Southern Baptist church.

Last year, Clinton gave a sermon at a Southern Baptist Church before the beginning of the Republican National Convention. His target was fundamentalist Christian politicians–such as Rick Santorum. Clinton condemned them for putting religious values above the benefit of the nation and compared them to terrorists, saying:

“Our number one threat abroad is fundamentalism, absolutism. Terror is their tactic, but it is their ideas, their hatred, their absolute certainty that they are so right that they can kill people who disagree with them – that is our enemy.”

Politically, Bill Clinton is highly regarded, presiding over a period of American prosperity and relative peace. He is a Democrat and both socially and fiscally liberal. During his first year as a president, Clinton cut taxes on the nation’s poor and raised them on the rich. He tried–and failed–to pass universal health care. He expanded gun control and established “Don’t Ask, Don’t Tell” in the military.

Clinton revoked the Glass-Steagall Act. It is a law that places important regulations on banks. Many economists believe the freeing-up of bank autonomy allowed greedy bankers and investors to get away with fraudulent practices. It is a huge factor for the economic crash of 2007 that we’re still dealing with today.

When Clinton signed the law that repealed Glass-Steagall, he said:

“America’s consumers, our communities, and the economy will reap the benefits of this Act.”

He couldn’t have been more wrong.