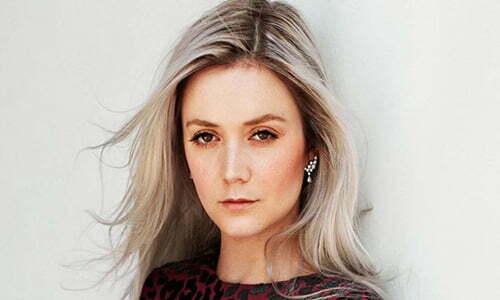 While she was growing up, Billie’s mother, Carrie Fisher and her father, Bryan Lourd, didn’t want her to become an actress. She said:

“When I first started acting, everyone in my family did not want me to act.”

She further said that they always told her to go to college and to stay out of the entertainment business. It was because while her mother was following her dreams, she experienced a great deal of heartache and she even became addicted to drugs and alcohol. They didn’t want her to go through the same. Billie obeyed her parent’s wishes by studying religion and psychology at New York University and graduating in 2014. However, after graduating, Billie decided to pursue her dream of acting.

Billie Lourd was dating actor Taylor Lautner. They split after eight months of dating in July 2017.

Billie Lourd hasn’t shared any of her religious views lately.

Billie Lourd tends to stay out of the political world as she hasn’t shared any political views yet.

Billie Lourd found the perfect way to honor her late mother, Carrie Fisher, on the one year anniversary of her mother’s untimely death. She traveled to Norway to see the northern lights. It was something she said she always wanted to experience with her mom. Her mother, Carrie Fisher died on 27th December 2016 after suffering a heart attack at age 60. Fisher’s mother, actress Debbie Reynolds, also died of a stroke one day after her daughter.

“My mom made me watch ‘Star Wars’ for the first time when I was about 7 years old. When I was younger, I hated action movies and pretty much anything loud. So when she put it on, I covered my ears and ran out of the room.”