Bradley Charles Cooper was born on 5th January 1975, in Philadelphia. He is an American actor and producer and was one of the world’s highest-paid actors for three years. He has been nominated for four Academy Awards, two BAFTA Awards, two Golden Globe Awards, and one Tony Award. In 2015, Cooper appeared on Time’s list of 100 most influential people in the world and Forbes Celebrity 100 on two occasions. 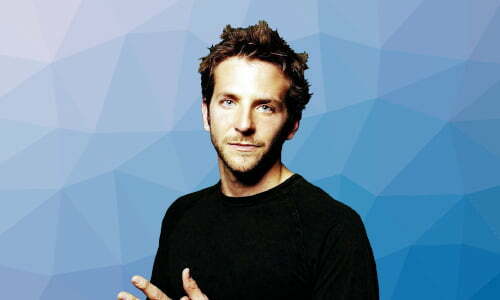 Cooper became famous from the movie “The Hangover” and has received Oscar nominations from 2013 to 2015 for his roles in “Silver Linings Playbook”, “American Hustle”, and “American Sniper”.

Bradley Cooper makes the Celebrity 100 for the second time this year thanks to his ability to balance popcorn cheese such as “Aloha” with Oscar-worthy fare including “American Sniper.” Cooper produced and starred in the latter, which was directed by Clint Eastwood after Steven Spielberg passed on the military epic. The only hangover from the bro trilogy Cooper hit the big time with is his production company, which he runs with “Hangover” director Todd Phillips.

Bradley Cooper was raised in a Catholic family from a young age. He became closer to God after a brief stint in rehab. He mentioned in an interview that he prays daily and that he didn’t lose his virginity until he was 17.

Bradley Cooper is a Democrat who has donated money to other Democratic candidates. He signed a letter with a group of actors thanking Obama for his actions about gun control in 2016. Cooper has also donated money to the Hillary Clinton campaign when she was running for senator in 2000. In 2016 he attended the Democratic Convention which caused some confusion as some people assumed he was a Republican because of his role in American Sniper which was simply an acting role and in no way was a reflection of his beliefs.

Bradley Cooper’s hobbies include listening to music, reading and motorbike riding. He loves to play football and golf. He enjoys cooking too. He would like to cook for his friends when he was young and have them try new recipes he made. He even plays the role as a chef in the movie, “Burnt”.