Brandon Marshall was born in Pittsburgh, Pennsylvania on March 23, 1984. He is an American football wide receiver for the New York Giants of the National Football League (NFL). Marshall is known for his ability to break and dodge tackles.

He played college football at UCF and was drafted by the Denver Broncos in the fourth round of the 2006 NFL Draft. Marshall has also played for the Miami Dolphins, Chicago Bears and New York Jets.

Brandon was top of all NFL wide receivers in yards after the first contact for the 2007 NFL season. He is so good at what he does that not only did he make fame, but also his teammates praise and adore him. Here are few comments made about him by his teammates. 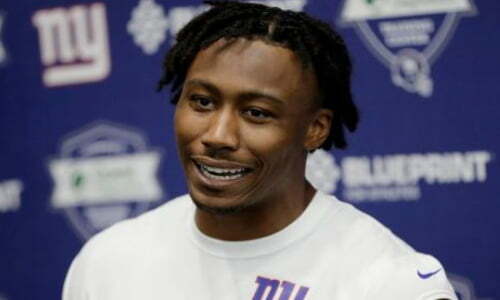 Cornerback Brandon Flowers said regarding Marshall’s breakaway ability, “Brandon Marshall is a defensive lineman playing wide receiver. He wants to inflict punishment on you. He wants you to try to tackle him so he can shove you off of him and get more yards.” Cornerback Nnamdi Asomugha said Marshall is “the toughest guy to bring down, one-on-one.”

On December 13, 2009, against the Indianapolis Colts, Marshall set an NFL record for receptions in a game with 21.He also is one of six players in NFL history to catch at least 100 passes in three consecutive seasons.

On March 8, 2017, Marshall signed a two-year, $12 million contract with the New York Giants. On October 8, 2017, Marshall has carted off the field after hurting his ankle in the Giants’ 27-22 Week 5 loss to the Los Angeles Chargers.

On October 9, 2017, Marshall announced that he would undergo season-ending surgery. He was placed on injured reserve on October 10; 2017. He finished the 2017 season with 18 catches for 154 yards and zero touchdowns.

Although he has a history of alleged domestic violence dating back to 2007, he has not failed to be professional when he needs to be.

Not much is known about his religious beliefs. He hasn’t been in the spotlight very much until recently with his protest of the National Anthem.

Not much is known about his religious beliefs. He hasn’t been in the spotlight very much until recently with his protest of the National Anthem.

Marshall enjoys restoring vintage automobile. We know this because that is what he talks about almost all the time when he is not playing football. He also enjoys spending his free time with his family.