Common, whose real name is Lonnie Rashid Lynn Jr. is an American hip-hop recording artist, poet, actor, and a film producer. He was born on March 13, 1972, in Chicago Illinois. Common released his first album, Can I Borrow a Dollar? In 1992 and maintained a significant underground after that. He then gained notable mainstream success in the late 90s through his work with the Soulquarians. 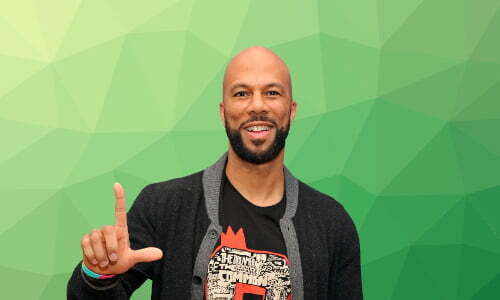 Common released his music under several music labels like GOOD Music, Relativity, and Geffen amongst others but he finally launched his recording label, Think Common Entertainment in 2011.

He won his first Grammy Award in 2003 for his R&B song Love of My Life with Erykah Badu. The popularity of the song matched by Be, which he released in May 2005. The song nominated for Best Rap Album for the 2006 Grammy Award. Common received his second Grammy Award for Best Rap Performance by Duo or Group, Southside, which featured Kanye West. On November 27, 2007, Common released his best-of album; This is Me Then: The Best of Common.

Common has also narrated Bouncing Cats, an award-winning documentary, about one man’s determination to improve the lives of children in Uganda through hip-hop music. The rapper starred as Elam Ferguson on TV series Hell on Wheels.

During an interview with afro.com, Common said that he’s a Christian, he believes in God, and Lonnie has been a member of Trinity United Church of Christ since he was 8. Furthermore, he stated that he believed in the existence of God, and respects anyone who believes in a higher being.

Common is a big supporter of Obama, and he has even been invited to perform at the White House during his presidency. However, the invitation considered to be controversial and many people were outraged by Common’s invitation to the White House.

The rapper has had romantic relationships with Erykah Badu, Taraji P. Henson, Kerry Washington and Serena Williams. However, Common maintains that he has been single since July 2014.

Common loves acting and inspiring people. In fact, he said that he would be a teacher if he weren’t a musician. He also enjoys helping people.