Hailee Steinfeld is an extremely well-known American actress, model, and singer. She was born on December eleven, 1996, in Tarzana, Los Angeles, California, USA. Hailee became in the limelight after starring as Mattie Ross in True Grit (2010), for which she was nominated for numerous categories of awards, including the Academy Award for the ‘Best Supporting Actor.’ After that, Steinfeld gained more popularity and prominence for roles as Petra Arkanian in ‘Ender’s Game.’ 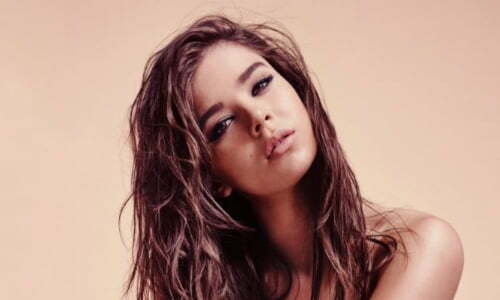 She also played one of the most famous Shakespearean character Juliet in ‘Romeo and Juliet’ released in 2013. One of her famous work later was ‘3 days to kill’ released in 2014. In April 2015, she was cast in a lead role in Break My Heart 1000 Times, based on the YA novel by Daniel Waters. She brilliantly performed in ‘Pitch Perfect 2’ (2015) and Pitch Perfect 3 (2017) and received a Golden Award nomination for Best Actress in a Motion Picture-Comedy and Musical award for her portrayal of Nadine Franklin in ‘The Edge Seventeen’ in 2016.

Steinfeld is the daughter of an interior designer Cheri, and Peter Steinfeld her father was a personal fitness trainer.  She has an elder brother, Griffin. Her paternal uncle is a fitness trainer Jake Steinfeld, and her maternal grand-uncle is former child actor Larry Domasin. Her maternal first cousin who is an actress True O’Brien also appeared in a television commercial when Steinfeld was young enough just eight years old. She was her inspiration for being an actress.

Steinfeld’s father is a Jewish. Her maternal grandfather was of half Filipino and half African-American.She attends Ascension Lutheran college, Conejo Elementary, and Colina middle school. She was Home-schooled from 2008 until her high school graduation in June 2015. Hailee brought up in a Jewish tradition but in Judaism religion is based on mother’s religion, so it is still uncertain whether she is a Jew or not.

There is still uncertainty about Steinfeld’s political views or beliefs. She has not spoken much about her political views from which we can assume that whether she is a Republican or Democrat.

Her favorite hobby is acting being a passionate actor this is the case with most of the actors. She said, “I love the film route, and I’m going to try my hardest to stay on it.” She also seems a social media lover as she said once that ‘Facebook is my life.’ In an interview Hailee told that she loves to write, taking photos, and singing is her passion.

She performs as a cheerleader for eight years. Miu Miu announced that Steinfeld had been chosen as its new face. She gave eight auditions for the role of ‘Mattie Ross’ in ‘True grit.’ She did many television commercials and give guest appearances on several television programs. Steinfeld won critics ‘Choice Movie Award’ for ‘Best Younger Performer.’ She won another MaxMara’s ‘Face Of The Future Award’ in 2013.