Kate Garry Hudson was born on 19th April 1979 in Los Angeles, California. She is an American actress who rose to prominence in 2000 for playing Penny Lane in Almost Famous. She won a Golden Globe for that role and was also nominated for an Academy Award for Best Supporting Actress. Kate is also known for her role in How to Lose a Guy in 10 Days, Raising Helen, The Skeleton Key, You, Me and Dupree, Fool’s Gold, Bride Wars, Nine, and Deepwater Horizon. Kate Hudson also co-founded Fabletics which is a fitness brand and membership program operated by JustFab. 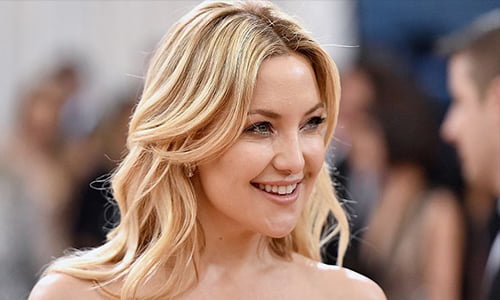 On December 31, 2000, she married Chris Robinson, the frontman for The Black Crowes, in Aspen, Colorado. The couple has a son named Ryder Russell Robinson who was born on 7th January 2004. Their divorce was finalized on October 22, 2007, with Hudson being granted joint custody of Ryder.

In early 2010, Hudson started a relationship with the Muse frontman Matt Bellamy. The got engaged in April 2011. Together, they have a son named Bingham Hawn Bellamy who was born on 9th July 2011. On December 9, 2014, the couple announced that they had ended their engagement. However, Hudson and Bellamy are on good terms with one another, successfully co-parenting their son. Currently, Kate is dating Danny Fujikawa since 2016.

“Only in failure do you reach success. You can only get to the good stuff when you’ve done the hard stuff.”

“I want my sons to respect women, and that starts with me. If a man respects his mom, you know she’s done something right.”

“We all have to find what works best for us and allows us to be our own best version of ourselves.”