Millie Bobby Brown was born on 19th February 2004 in Marbella, Spain. She is an English actress and model who rose to prominence for her role as Eleven in the Netflix science fiction drama series Stranger Things. She also earned a Primetime Emmy Award nomination for Outstanding Supporting Actress in a Drama Series for her role as Eleven in Stranger Things, at age 13. 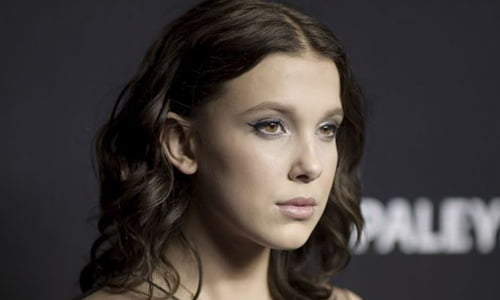 Millie Bobby Brown is recently dating a YouTube singer Jacob Sartorius. Rumors that the high-profile pair were dating have been widespread for several months, particularly after Brown posted an image of a teddy bear Sartorius gave her earlier in January. She confirmed the rumors by posting an Instagram story that included her new boyfriend, Jacob Sartorius who created a name for himself by making lip-sync videos on site Musical.ly, before transitioning into the pop music industry. He is now best-known in the YouTube world, with his music videos regularly garnering tens of millions of views.

Millie Bobby Brown accepted the best actor award Sunday night at the MTV Movie and TV Awards for her role as Eleven in Netflix’s hit show Stranger Things wearing two political pins. One was a blue ribbon which recognizes the American Civil Liberties Union, and the other was a light blue ampersand pin to honor the Gay and Lesbian Alliance Against Defamation (GLAAD) Together movement. Millie, upon receiving her award, thanked her co-stars and referred to them as family. She also praised the show’s creators for creating a badass female iconic character that she got the honor to play.