Paul Stephen Rudd is an American actor, who today, is best known for his iconic role as Scott Lang the AntMan, in the Marvel Cinematic Universe. He was born in April 1969, and he studied theatre at the American Drama Academy and the University of Kansas. 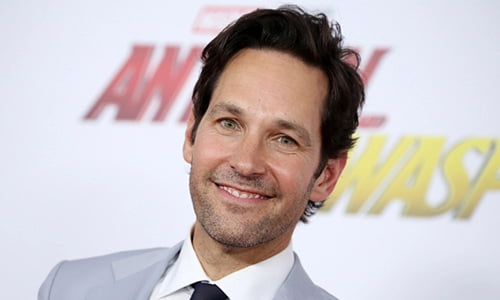 He made his debut in acting in a Sisters, an NBC series. He has also starred in several films, such as Clueless, Romeo + Juliet alongside Leonardo Di Caprio, Wet Hot American Summer, Anchorman: The Legend of Ron Burgundy and many others. In 2015, he landed the role of Scott Lang/Ant-Man in the Marvel Cinematic Universe (MCU). Since then, he had appeared in four MCU movies: Ant-Man (2015), Captain America: Civil War (2016), Ant-Man and the Wasp(2018), and Avengers: Endgame (2019).His father, Michael Rudd, who died in 2018, was a historical tour guide, and his mother, Gloria Irene, was a sales manager at a TV station. He also starred in quite a good number of TV shows. Before he joined the entertainment industry, he did several odd jobs to earn a living, such as ham glazing in a park.

He is a Jew and he claims his religious upbringing was a laid back one. He considers religion to be more a thing of heritage than faith. He is a Reform Jew.

Mr Rudd got married to Julie Yeager in 2003. Concerning his past love life or relationships, nothing is known about that as he keeps that particular aspect and period of his life to himself. With his wife, he’s had two children: Jack Sullivan Rudd and Darby Rudd.